Nick Mullens is an American football quarterback who appeared for the San Francisco 49ers in his first three NFL seasons. After Philadelphia Eagles waived him, the professional NFL player has been linked to Cleveland Browns.

Please scroll below to find more about him.

It seems like Nick Mullens is moving to Cleveland Browns.

Earlier, NFL Network reporter Mike Garafolo tweeted that Mullens is expected to join Browns. As per Garafolo, it will be a practice squad addition after the Browns reveals their 53-man-squad.

Previously, he played for the Philadelphia Eagles until he was waived on August 28, 2021. At the time, Eagles reporter, Jeff McLane, confirmed that Eagles released Mullens and signed Gardner Minshew.

Before his professional career, he played 44 games for Southern Mississippi for four seasons (2013 to 2016). During high school, he played with Spain Park as the team’s starting quarterback.

Mullens then went on to sign a one-year contract with the Eagles for $970 thousand in June 2021 but was waived two months later.

With his outstanding NFL career, Nick Mullens is estimated to have a net worth of around $2 million. Sportrack reports his total career earnings to be $1,860,490.

Who Is Nick Mullens Wife?

Nick Mullens is married to Haleigh Hughes (Mullens) since 2017.

According to his wife’s LinkedIn account, she worked as an instructor for the Universal Cheerleaders Association in 2012. She defines herself as a graduate student of the University of Southern Mississippi.

As for the fateful encounter between Nick and his wife Haleigh, it dates back to their high school days where she was a cheerleader of Southern Mississippi. Soon their romance flourished, and the couple tied a knot in July 2017.

Nick Mullens And His Wife Are The Proud Parents

Nick and his wife Haleigh are the proud parents of one child, a son.

They welcomed their baby on August 30, 2019. The pair embraced their son, Luke Clayton Mullens, who weighed 9lbs 5oz and 20 inches during his birth; Haleigh shared the moment on her Instagram.

Recently, little Luke has celebrated his second birthday. Showcasing the moment, Haleigh proudly shared the snap of the family of three on Instagram writing:

“Happy Birthday to our Lukey! We have had the best family day celebrating the most amazing two years with this funny, independent, and loving little boy. We can’t wait to watch you grow! Mommy and Daddy love you so much!“

Apart from that, Nick and Haleigh have a dog named Scott. 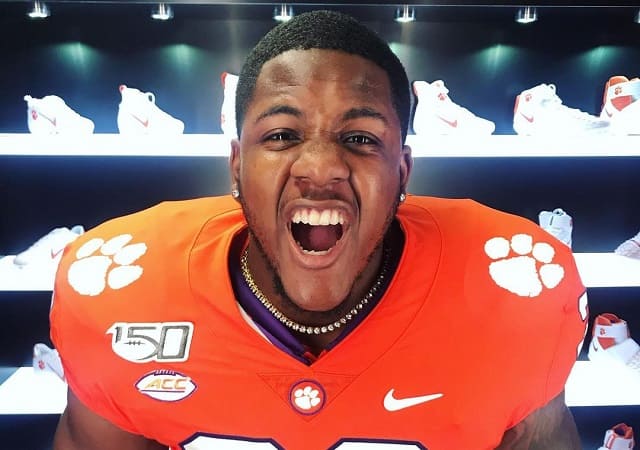 Published on 11 mins ago